The Kia Picanto has picked up the accolade for Most User-Friendly Tech at the Car Tech Awards 2017. The Car Tech Awards are judged by a panel of experts from Carbuyer and Alphr, who test the best new car technology launched over the past 12 months. Advances in technology have been a defining characteristic of new cars in recent years and have become a key feature on car buyers ‘must-have’ list.

The Picanto is the first small Kia to feature a Kia Connected Services package powered by TomTom™ and features Android Auto™ and Apple CarPlay™ smartphone integration as standard with a 7" Touchscreen available in the grade ‘3’ and ‘GT-Line S’ models. Android Auto™ gives access to Google maps navigation and Google Play music, while Apple CarPlay™ links to pre-loaded maps, music, podcasts, texts and messages and audiobooks, all through Siri voice control. Both allow occupants to connect to various apps and functions, including voice-guided, hands-free calls and texts.

Commenting on the Picanto, Carbuyer Editor, Stuart Milne said ‘Proving once and for all that clever and well-judged technology isn’t the preserve of expensive models, the Kia Picanto is startlingly easy to use. It takes our most user-friendly tech award – our judges were bowled over by the superb responsiveness offered by the colour touchscreen, while we found the organisation and positioning of the menus shames cars costing three times as much.

It has Apple CarPlay™ and Android Auto™ compatibility – and all these features are available on the mid-range ‘3’ and ‘GT-Line S’ trims. The fact that the Picanto also has physical buttons for the most frequently used functions sealed the deal.’

Paul Philpott, President and Chief Executive of Kia Motors (UK) Limited commented: ‘We are delighted the Picanto’s easy to use technology has been recognised and received such high praise from the judges. Now in its third-generation, the new Kia Picanto brings a more youthful and energetic character to the A-segment. Our customers love the high level of equipment available for the money.’ 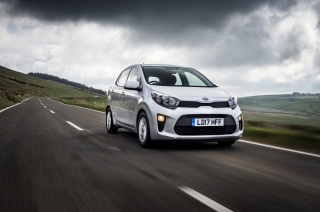