Car of the Year at its annual awards ceremony, the Car Dealer Power Awards, at the Spinnaker Tower in Portsmouth.

The super-mini was voted the most popular car by dealers across the country, securing the title for Kia. Michael Cole, Managing Director, receiving the award, said: "Car Dealer is essential reading for all of us at Kia - and winning the Car Dealer Power Car of the Year Award is an honour as it has been voted for by other magazine readers and dealers. We have sold almost 8,000 Rio since the latest model's release last autumn and with the recognition of this award l am sure sales will continue to increase at a pace."

The latest version of the Kia Rio went on sale in September 2011, and has attracted significant recognition in the UK market. The Rio boasts clean and sophisticated design and backed by Kia's leading 7-year warranty. Rio boasts excellent fuel economy and the flexibility of four engines, including the 1.1 CRDi engine. This has the lowest fuel consumption at 88mpg on the official combined cycle, and lowest CO2 emissions at 85gm/km of almost all non-electric cars on sale anywhere in the world.

Car Dealer magazine, founded in 2008, is the only glossy, A4 monthly magazine aimed at the motor trade. The magazine aims to produce an interesting read which is sent to over 12,000 dealers monthly.

Editorial Director for the magazine, James Baggott said: "We'd like to congratulate Kia on this award. We asked our readers to put their franchise and personal prejudices to one side, and vote for the car that has really brought the biggest change to the UK market in 2012. The Car Dealer Power Awards began three years ago, and are the only awards voted for by dealers. This year we received a record number of entries; more than 1,000 dealers voted for some 200 companies and suppliers."

"We say it time and time again, but Kia really is changing brand perceptions. It all began in earnest in 2010 with the Sportage, and since then the momentum hasn't stopped. Our readers said that this car is not only a dramatic step forward over its predecessor, but it also manages to take on the best-selling car in the UK - often beating it in magazine road-tests - while also undercutting it on price." Baggott added.

For more information on the Kia Rio, please visit www.kia.co.uk. 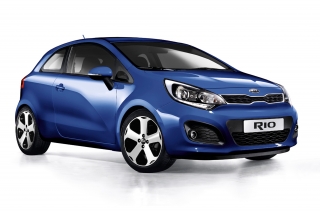