As an official partner of the League of Legends European Championship (LEC) at the Olympic Athletic Centre of Athens from September 7-8, Kia Motors displayed the Kia Ceed and Sportage models, and aired the video commercials ‘Driving Your Game- Kia-LEC’ and ‘The Perfect Intro.’

“Through our collaborative marketing with LEC, which enjoys the most innovative competition among different leagues around the world, Kia Motors has been able to approach the younger generations and get close to them naturally,” said Artur Martins, the Vice President and Chief Marketing Officer at Kia Motors.

The Ceed and Sportage models, both emblazoned with official LEC graphics, are displayed beside the broadcasting booth.

The number of esports fans worldwide is estimated to reach 422 million people in 2019 from 281 million in 2016, and expected to top 600 million by 2023. Although organised online and offline competitions have long been a part of the video game industry, they were not significant until live streaming became a dominant force around the world. By the 2010s, esports had become a major driver of the industry, with many game developers actively designing games tailored to the professional esports sector.

“We are privileged to have Kia Motors choose the LEC for its first partnership in esports, and appreciate Kia’s support in activating our partnership,” said Alban Dechelotte, the Head of Business Development at Riot Games Europe. “The overwhelmingly positive reception from players speaks volumes about the quality of our partnership, and we look forward to the next chapter of our shared story.”

This year’s tournament marks Kia’s first sponsorship of the League of Legends European Championship, where Europe’s finest teams lock horns to lift the LEC trophy and secure their regional spot at the Worlds 2019. The finals also host the second LEC Fan Festival, where visitors can take part in a variety of exciting activities, such as cosplay and meetings with their favourite pros.

At the LEC, Kia Motors also operates a games zone, where fans can play a digital game featuring the Sportage and Ceed models, and a photo zone where they can take photos and win lottery prizes. Around 10,000 people participated in the two-day finals as spectators and 600,000 people watched the competition online from around the world. 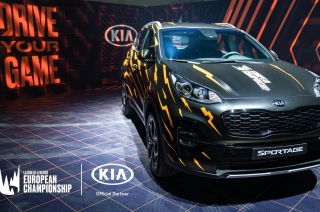